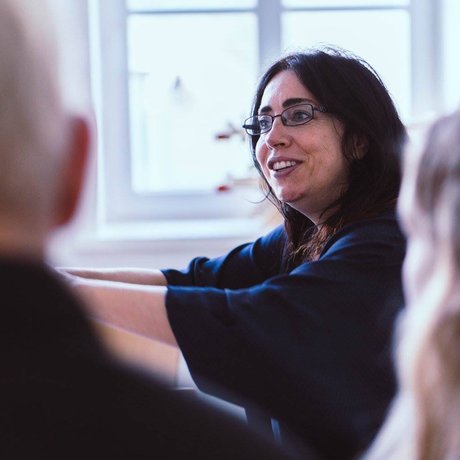 Theresia Walser: characters have a right to participate in creative process

Theresia Walser is named one of the widely staged contemporary German playwrights whose works are popular not only in Germany but also in other European and other countries. In 1998 her play “King Kong’s daughters” brought her not only commercial success and praises of critics but also “Theatre heute” magazine’s award for the best young author. Among her other awards there also are two best play awards from Goethe institute.

German playwright came to Lithuania to lecture in the first workshop of the fourth play reading festival Dramokratija. Works of this multiple times awarded author can be called contra-projects of popular stage reality. Her unusal poetic verbal works are praised by critics. In her plays Theresia boldly speaks about social numbness, uses painful irony and quite often writes about inconvenient political subjects. After the recent election in Germany, there should not be a lack of the latter.

Writing plays wasn’t your first choice of career but you have been writing for over 20 years. What inspired you to write for theatre?

Probably, even though I realized it later, the main reason why I write is because writing helps me to comprehend my relationship with environment around me. For me writing is a way of thinking. In my head it's like there are different minds' voices and they constantly are arguing, discussing, questioning things and looking for answers. German word for talk is „gespräch“. English „talk“ is very narrow in meaning. „Gespräch“ are different voices who are communicating with each other. In other words, my way of thinking is more like a dialog because there is a constant dialog inside my mind.

How do you choose subjects for your plays?

It depends on circumstances. At the moment I mostly get plays ordered by theatres. It would be hard to survive otherwise. In Germany it is usual that a theatre chooses the playwright to write a play. Sometimes they give the subject but not always. Sometimes they can ask something, let’s say, a play with minimalistic scenography or a play for three characters. Or, as was with my last play which was ordered by a Swiss theatre, they asked for a play about an international bank. About secret meetings in there which are very mysterious and are not recorded, to be more precise. It is difficult to write about something you have no opportunity to experience. But it is an example of what you might be offered to do. Also subjects quite often come from the characters. Characters bring the subject with them.

System like this, does it restrict or free you? As we have learned in your workshop, restrictions might be freeing.

Do you prefer to choose political subjects for your plays or personal experiences?

I think, personal interactions are becoming political. I don’t believe it is possible to live in a vacuum. Of course, occasionally we need political agitation which would propagate something, would transfer the message, would inspire to fight for or against something. For this type political theatre there also is time and place when it is needed. But it isn’t my type of writing. Even if I am writing about such things as international bank or war, I always try to localize the conflict, to make it more specific. I try to find characters who would reflect the subjects.

For example, when I was writing a play about the war, I chose a talk show format for it. There were an army general and a female soldier who were in Afghanistan in this play. Also there were beauty queens - winners of beauty pageants because at that time there was an interesting story about a pageant in a Muslim country. At the same time there was a stoning of a woman. So contestants of beauty pageant who never before have made a political statement suddenly came to the center of attention in a complicated situation. They had to express what it feels like to be in a beauty contest when in a hundred meters a woman is being stoned to death.

So all the characters were touched by the war but from different positions. For example, the soldier was totally traumatized by her experience in Afghanistan and the general has 180 degree opposite opinion about what happened. All these characters were in a very controversial discussion. Every one of them had their own truth and it was difficult to comply them. But all these voices had to survive in one room.

What, in your opinion is a good play? What are the criterions?

I have only one answer even though it may sound banal - the best play is the one which makes the viewer truly live the conflict. One of my favorite conflicts is between Antigone and Creon. It can be simplified to just saying Creon is the bad guy and Antigone is the good one but masterful director will notice that there is truth in Creon’s position and he has a right to it. Collision of these different positions is unsolvable and it is wonderful because the viewer has to constantly change his sides, what he or she is rooting for. And this confusion is possible only in theatre. There are more freedom here than, let’s say, in cinema where audience is clearly led somewhere, he is told what to see and what to feel. Meanwhile in theatre the viewer can quickly fall in love what is the worst and, shock by this feeling, change his views. These “inside movements” are very important in life, they help us not to get stuck to our own truth, not to stick with it. Theatre gives the viewer the opportunity to see the most cruel things hiding deep inside him or herself. That moment of seeing things from different point of view lets to experience catharsis.

What are you writing habits?

My life changed after I had a daughter. Before she was born my life wasn’t so structured. I had loads of free time and mostly worked at night. Now it has changed. Now I work mostly in the mornings. I like early mornings, even when it is still dark outside. It is my favorite time of the day. Then I feel loneliness because everybody else is sleeping. This feeling can be experienced only late at night or early in the morning. But loneliness is also different nowadays. In the morning it is full of waiting for what is going to happen and at night you rethink what already have happened.

What would you advice for young playwrights?

Maybe it is not very nice thing to say but I would advice not to be modest in what you throw out of what you've written. Sometimes it happens that you have written a few scenes but there is only a page of really good material. So I would advice to have courage to cross out. Also, watch the processes between characters. Sometimes we are too confident with our plans and ideas, get stuck on it, are proud of them. But when there come the characters, they create their own lives, they can defy your plans and ideas. So be ready for vividness which can be brought by the characters. Use their possibilities you will see once you notice their protests. Maybe they will change your plans. And when that happens, it might also form new ideas. This is a dialog between the author and his characters which must be noticed. As I said to students in one university, characters have the right to be a part of creative process. Let them speak.

How do you feel about contemporary state of politics?

Well, if we talk about Germany, many people thought we have achieved something and we will not fall again. That we will not go back because we have created democracy and will never relive what we have experienced in the past. At the moment there are a lot of disappointment. We have to see that people are afraid of variety. Of course, it is shocking. It is scary to see it exist. To suddenly see racism, blaming and guilty quest come to life. There is a need to have an enemy and it can be a stranger, a gay person, a Muslim. We never thought is could happen. Now when AfD party is one of the dominating ones I think that the task of democratic process is to deal with it. Democracy is not a convenience. Freedom is not a comfortable thing. It is work. It is ability to understand and accept that this process will never be finished. Maybe that is why there are so many people who are disappointed. They ask where are the things that were promised. They thought that democracy is like garden of Eden. But democracy is not something what can be completed. It will never be completed. It is the way to exist every second of our lives. And it is part of democratic process, to hear these voices who want to be heard. You can’t simplify this process.

How do you imagine the future of theatre? Can it change the world?

Theatre never was a tool of mass communication. It is not cinema where thousands of people can see the same film. At all ages only small part of society went to theatre. But I have no doubt that theatre will continue to live because people need to see people. That is not going to change. And it is the base of theatre.

What impression of Vilnius are you bringing home?

This city is very rich with history and it is full of beauty. I had a chance to see nightlife of Vilnius and it was an amazing excursion. It’s like there are many small worlds which are changing each other. You open small gates of a garden and you come to totally different time. You turn to some street and you come to some place you don’t expect to come to. Maybe it is what describes this city - there are so many different times and features which are able to co-exist. I will definitely come back here.