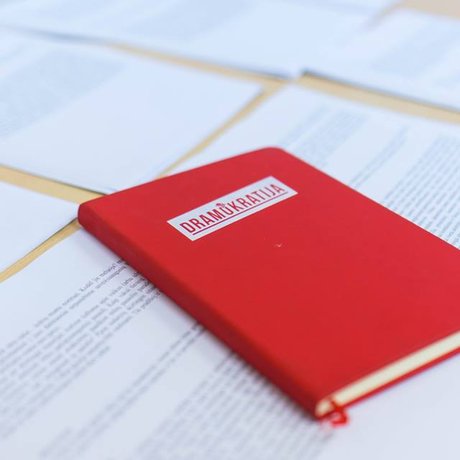 This spring for the fourth time playreading festival “Dramokratija” will invite audiences to meet contemporary plays of upcoming Lithuanian playwrights and it has opened sign-up registration for actors and directors to join the teams. As usual, proessional and upcoming actors and directors sign-up by choosing the synopsis of the play but without knowing the name of the play’s author. This way festival wants to pursue principles of open castings in Lithuanian theatre community.

This year there will be ten plays on subject of propaganda represented in Dramokratija. Two of them has been written by young playwrights from foreign countries. Eight of them were written during the series of Dramokratija workshops which took place between September and December and allowed participants to works with experienced playwrights Theresia Walser, Mikhail Durnenkov and Gabrielė Labanauskaitė. Five of these plays were selected for the main program. Excerpts of the rest of the plays will be read on the last day of the festival during “Dramokratija’s” best friend “Kablys’s” brunch.

Theatre critic Milda Brukštutė, writer and playwright Sigitas Parulskis and journalist and writer Dovydas Pancerovas were the jury who selected the plays for the main program.

“The plays are on very different levels. It is obvious that for some playwrights this is the first encounter with writing for theatre and others have been doing that for some time. That is the charm of “Dramokratija”, it gives chance to try themselves for total beginners”, Milda Brukštutė, who never misses festival events since its first edition, was happy to know that all the plays will be read and was curious how directors and actors would enrich plays.

“It’s good that young playwrights choose relevant, socially sensitive themes, that they use blasphemy and imitate asocial persons”, commented S. Parulskis who was harsher for the upcoming playwrights and wished for them to see they characters more criticaly.

“That was an interesting experience in all meanings. On one hand, I had to evaluate plays. On the other hand, it was very interesting and useful to see our world through the eyes of young artists”, D. Pancerovas shared his impressions.

Everyone will be able to hear plays during the festival’s free readings which will take place during 16th-22nd of April.

Actors and directors are invited to meet plays here. The deadline for sign-up is 12th of March. Selected members of teams will be contacted by playwrights personally.

Festival is sponsored by Embassy of Germany, Geothe institute in Vilnius.